Air Race Rules
Air Race
Short Description:
Flying robots have to complete figure 8's around two poles that are several meters apart. The robots have to demonstrate their ability to maneuver quickly and accurately in three dimensions.
Changelog
17.07.2017
3.1. Aim of the Game
Important!!! One person can be operator for maximum 2 robots.
If you are called to play and you don't come in 5 minutes the robot is desqulified.
02.01.2014
First publishing
1. General Requirements
1.1. Field Dimensions
A. The field is at least 10 m long, 5 m wide and 3 m high. It is covered by a safety net.Two orange poles are placed in the field at least 5 m apart. The poles are 3 m high and have a diameter of 11 cm. There is guaranteed free space of 2 m around the poles.
B. As a navigational aid there is a black dashed line on a bright background on the floor. The line has a width of 5 cm. Each dash is 30 cm long and the gap between two dashes is 10 cm. The line is indicating the figure - 8 around the poles. 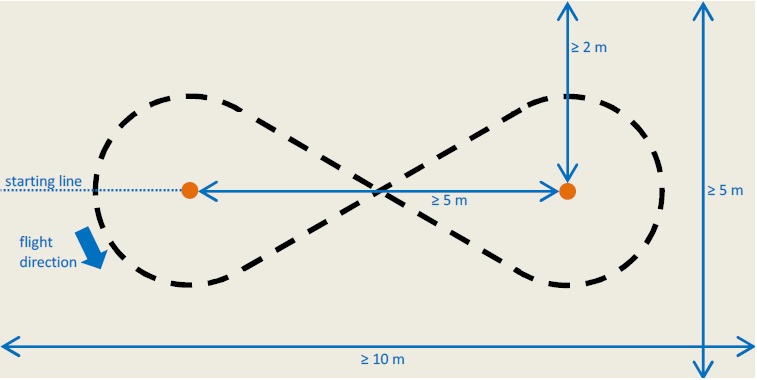